If you’re a runner, you likely already know that injury happens not just to the body, but to the soul. And if you’re a runner but haven’t yet had your world come crashing down due to injury, let this be your warning.

As a runner, I’m no stranger to injury. Whether it’s the blisters, the chafing, the nagging knee pain, the pulled hamstring, or the stress fracture, injury can’t be avoided. CORRECTION: Injury usually can be avoided but most runners don’t know enough about their own bodies to prevent injury and keep themselves healthy while working toward their personal goals.

The problem is that most runners take themselves very seriously. This is not inherently a bad thing – it teaches us discipline, perseverance, and hard work – but many of us let this trick us into thinking that we’re invincible. We tend to push ourselves too hard, forgetting the north star which is often the reason we started running in the first place — our health.

Five months ago, I went to the ER for debilitating upper back and chest pain. Twice. At first they thought it was a pulmonary embolism, but upon ruling that out, they sent me not-so-merrily on my way as if it was nothing.

After many doctor appointments, tests on tests, too much money, hours upon hours of sleepless nights, every pain medication under the sun, some acupuncture, and lots of physical therapy, I’m happy to say that I’m beginning to see a glimmer of progress, though it is touch and go. Progress is not a one way road, and the most frustrating thing is that hindsight is 20/20. If only I had realized then what is now so clear to me — I am not a marathon-running machine, nor can I expect to achieve my goals without adjusting my approach to address my health and strength more holistically.

Running has a huge effect on me. Most directly, it boosts my fitness, and allows me to binge on extra calories in the form of my favorite ice cream or local burrito. 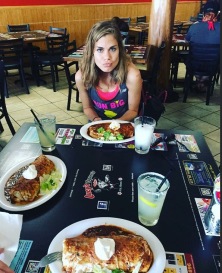 Indirectly, it’s my sanity, my escape, my pet project. No matter how you look at it, running has an immensely positive impact on my life, and without it, I’ve been struggling. The lack of running combined with the pain that I endure has affected my mood, my diet, my work and my relationships, not to mention my physical health (It’s pretty impossible to shake those ice cream cravings…). It’s tough to admit that I was doing it all wrong, but if I want to make my comeback — if I want a second chance at proving to myself the athlete that I am — I have to change my ways and the time is now.

Just because you run, it doesn’t mean you’re healthy. Oh you run marathons? Still no. Don’t listen to those normal people who think that marathoners are superheros. Don’t let yourself get caught up in the training and forget to give your body what it needs. Until you master the basics, these milestones are just distractions. First thing’s first. Prioritize strength and health. Match your diet to your nutritional needs. Support your body with the muscles it needs to get through the day. And most importantly, learn self awareness. Take baby steps if you have to. If you don’t, you’re just half-assing it. Runner or otherwise, no matter who you are, this foundation is important to support your body. And while it may seem silly in the short-term, the long-term depends on it.